Based in Zeeland, Michigan used Herman Miller furniture Inc has produced office equipment, as well as home and office furniture since 1905. Their most famous products are the Eames Lounge chair, Noguchi table, Aeron chair, Equa chair, and the Marshmallow Sofa. They are also well known for their invention of the office cubicle, which was originally called the Action Office II. This was created in 1968, under the leadership of Robert Propst.

It was not until 1930 that the company moved from its original wooden furniture to expand into new products. With the Great Depression in full force, they were forced to hire a modern designer, Gilbert Rohde. Rohde’s vision led to the debut of a new furniture collection in 1933 at the Century of Progress Exposition in Chicago. This allowed the company to open a showroom in the Merchandise Mart in not only Chicago but also in New York City by 1941. Rohde’s influence also led the company to enter into its first contract to make office furniture in 1942. The Modular Executive Office Group (EOG) was one of the first of their new line.

Unfortunately, Rohde died in 1944 and was soon replaced by George Nelson, an architect. He became the director of design in 1945 and became one of the guiding visionaries for the company for the next forty years. Not only that, but he was responsible for the recruitment of several promising designers, such as Robert Propst, Ray Eames, Charles Eames, Alexander Girard (textile designer), and Isamu Noguchi. Under his guidance, from the late 1940s on, Herman Miller Inc was responsible for some of the world’s most iconic modern furniture e.g. the Marshmallow sofa, Ball clock (produced by the Howard Miller Clock Company), Sling Sofa, Eames Lounge Chair, and Noguchi Table.

Pree remained on as the CEO of Herman Miller Inc until 1961, when his failing health forced him to retire. His son, Hugh, became CEO and remained in that position until the 1980s, and then he was replaced by his brother, Max, until 1990.

Throughout these changes, Herman Miller continued to expand. In 1961, the Herman Miller Research Division was established in Ann Arbor, Michigan. This is where the Action Office furniture line was developed in 1964 by Robert Propst and the New York Design Studio (ran by George Nelson). The first line developed by them e.g. Action Office I, was not very successful at all, although it induced Propst to create the Action Office II line, which is when the concept of the office cubicle was created and introduced into the workforce. This revolutionized the workplace as we know it today, and Action Office II was eventually renamed to Action Office. The products associated with this line, as of 1998, have generated over $5 billion in revenue.

Herman Miller has never stopped innovating and evolving. While George Nelson was a huge design influence, they did not stop there. In the 1970s new designers were added to their team, most notably Bill Stumpf and Don Chadwick, both of whom designed the Equa chair (a chair that is still for sale to this day) and the Aeron chair. Clino T. Castelli was added to the team in 1981. His designs focused on the physical environments e.g. the Ethospace design, CMF design, and the Design Primario. Another designer, Tom Newhouse, developed the Newhouse Group in 1987 e.g. freestanding furniture. He also had input on the Ethospace design for the Action Office line. Ray Wilkes was well known for his “chicklet chair” designs e.g. the Modular Seating Group.

Stephen Frykholm became known for his posters promoting the summer picnics of Herman Miller Inc from 1970 to 1989. Some of these prints are now housed in the Museum of Modern Art and are a collector’s dream. 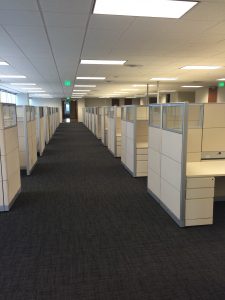