A cubicle is defined by a partially closed off workspace in an office setting that is separate from nearby workspaces due to 5-6 feet tall partitions. A cubicle is meant to isolate office workers and managers from the noise and usual sights of an open workspace so that they are able to concentrate without any distractions. Cubicle elements are made up of work surfaces, walls, drawers, overhead bins, and shelves – which can be arranged according to each individual’s needs. Trained personnel usually install each cubicle, although some cubicles allow anyone to put them together without having to have specialized training.

History of the Cubicle

2010 cubicles were usually equipped with a keyboard, mouse, monitor, and computer on their work surfaces. A lot of officers use overhead lighting to light up the office, and so cubicles may not have had any other lighting besides that. Furniture that you may find in a cubicle would include an office chair, filing cabinet to lock important documents away, a coat rack, and a bookcase.

Robert Propst created the office cubicle for Herman Miller in 1967. It was originally called the Action Office II. Cubicles, ironically enough, are seen as being a symbol of uniformity and blandness in the modern office workforce, even though they give each worker a degree of privacy and control – particularly when you compare them to past workspaces that were just rows of desks lined up in a large room. Cubicles are also cost-effective on top of that, as installing cubicles are less expensive than everyone having their own personal, private office. Cubicles also give employees the ability to decorate their personal space exactly how they want – with posters, pictures, plants, and many other items.

“Cubicle” comes from the Latin term, cubiculum, which means bedchamber. It was first used in the English language in the 15th century. It soon fell into more common usage, referring to a small room of any sort e.g. small rooms, study spaces that contained removable partitions, and the like. Just like the original carrel desk, a cubicle is designed to give the user a certain amount of privacy, while also taking up as little space as possible in a medium or large room. Before companies began adapting the cubicle, workers would often work in a large room with rows and rows of desks, and had to endure the activity and sounds of everyone around them.

Herman Miller founded the Herman Research Corporation in 1960, following the direction of Robert Propst and George Nelson. Their goal was to work through the issues that you would find while using furniture, but did not redesign the furniture itself. Their first project was to evaluate the office setting, as it had evolved through the 20th Century, and how well it functioned throughout the 1960s. Propst studied how information traveled and how people worked in the office setting, as well as how the layout of an office affected work performance. Throughout his research process, Propst consulted with many specialists, including anthropologists, mathematicians, and behavioral psychologists.

From the studies he underwent, he concluded that the 20th Century office environment had undergone substantial changes, especially regarding the amount of information that was processed. The amount of information that had to be analyzed, organized, and maintained by a single employee had increased dramatically. However, the basic layout of the office had not been changed at all, with each employee sitting behind huge rows of desks in an open room, with no privacy whatsoever. Propst realized that an open environment like that actually reduced the amount of communication that employees performed with each other, and negatively impacted their personal work. Propst stated, “One of the regrettable conditions of present-day offices is the tendency to provide a formula kind of sameness for everyone.” Also, the bodies of the employees suffered as they had to sit in one position all day, every day. Propst concluded from that observation that they needed not only privacy but also interaction with others – mainly dependent on the duty they were performing.

Despite winning the Aloca Award for design, the Action Office I did poorly in terms of sales. This led Nelson and Propst back to the drawing board, which caused several disagreements over the years between the two, regarding the best work environment in a corporate office. This led to Nelson being taken off the project, which led to Propst being able to focus on creating a workspace that was able to constantly change to suit the needs of the employee at the moment, all without having to buy new furnishings or furniture, while also giving the employee some privacy, and the ability to personalize their surroundings without it affecting the workers around them. Propst realized that people were always more productive in their own personal “enclave” that they could make their own, but also needed to be able to let people inside of their space. He eventually created a “back-up” concept, with a two or three-sided vertical division that gave a separate territory to each employee and privacy, without taking away their ability to see and participate in their surrounding activities.

Propst created the Action Office II around the defined space of a mobile wall unit. This unit would also be able to contain multiple furnishings for a workstation, which helped the vertically oriented workspace concept. Each individual component was interchangeable and standardized so that they could be assembled and installed quickly, with no specialized training necessary. They were also incredibly flexible to each employee’s needs so that each employer could change the environment as their needs changed. The Action Office II lineup was a massive success right out of the gate, and several other manufacturers rushed to copy them. By 1978, the Action Office II was simply known as “Action Office”, and by 2005 it had made $5 billion in sales.

The Federal Reserve Bank of New York was the first office to place the Action Office design in their office. They had contracted Herman Miller and George Nelson in 1963 to design them an office space that could maximize the efficiency of a small room/workspace. The original design was based on Nelson’s Comprehensive Panel System (CPS) and contained “pods” of 4 cubicles, which were arranged in a swastika styled pattern. Each had an L shaped desk and contained overhead storage. Photos of this design layout are not dissimilar to cubicles that we have today. This same design was used again in 1964 in the Woman’s Medical Clinic (in Lafayette, Indiana), and Nelson also used it in his New York design offices.

IBM partnered with Steelcase (office furniture manufacturer) between 2000 and 2002 to research ergonomic, hardware, and software aspects of the cubicle/office setting of the future. This was done under the name “Bluespace.” Several prototypes of Bluespace were created, a hi-tech, and multi-screen workspace, which was actually shown at Walt Disney World. It showed movable screens inside and outside of the space, individual lighting, projection system, heating and ventilation controls, and several software functions that controlled everything.

Douglas Ball designed and built several versions of the Clipper (CS-1), which was a capsule desk that resembled a streamlined front fuselage of a fighter plane – all in 1994. It was to be a computer workstation, with louvers and a ventilation system, along with several other built-in features that resembled an ergonomic desk. An office space with this design would resemble a flight simulator hangar than a usual office space. This design was installed in the permanent design collection in the Design Museum in the UK. 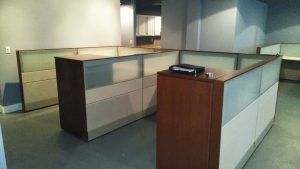